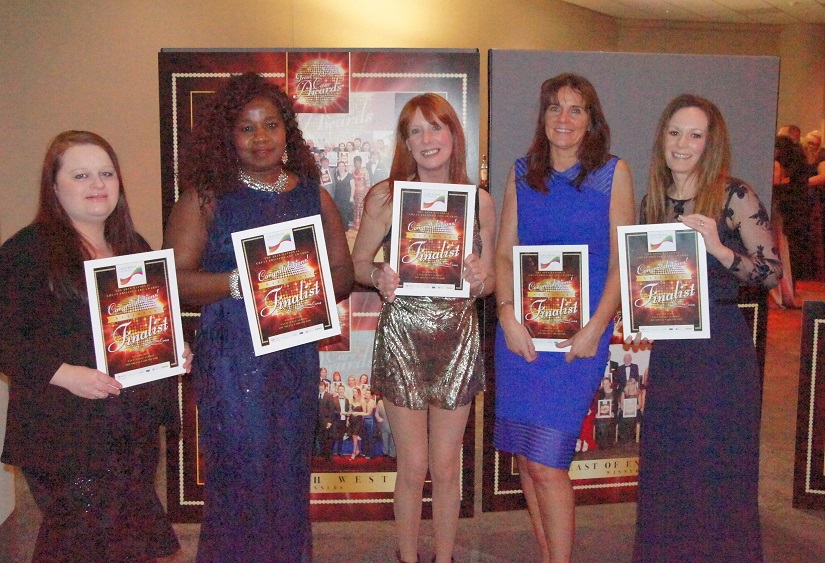 Springhill Care staff from across the group have been praised after a team attended the national finals of the Great British Care Awards.

The awards are held each year to celebrate the achievements of the sector and pay tribute to those individuals who have demonstrated outstanding excellence within their fields of work in social care.

Winners are chosen for 21 categories from the thousands of entries received each year. Springhill was shortlisted in four categories:

Winners from regional finals held previously went on to make up the national shortlist. In the end, Springhill was unsuccessful on the night, but Donna Briggs, Managing Director of the care group, said it was great to be selected as national finalists.

She said: “We all had a fantastic evening and to be chosen by our peers as among the very best in the country is a great honour.

“Everything we do is focused on our residents, and our staff work tirelessly within their teams and the wider community to live and breath our values. This really is a sign that we are leading the way in quality, person-centred care.”

More than 1,000 guests were entertained by X Factor and Hollyoaks star Ray Quinn, with TV personality Alison Hammond presenting the awards followed by an evening of music and entertainment.

Donna added: “We had an excellent table located right at the front of the stage which was handy for all the dancing we did.

“Thank you to everybody at Springhill Care Group who supports each other on a daily basis and well done to the finalists who are leading the way for Springhill, you are all #CaringHeroes”

The awards were held at the International Convention Centre in Birmingham. 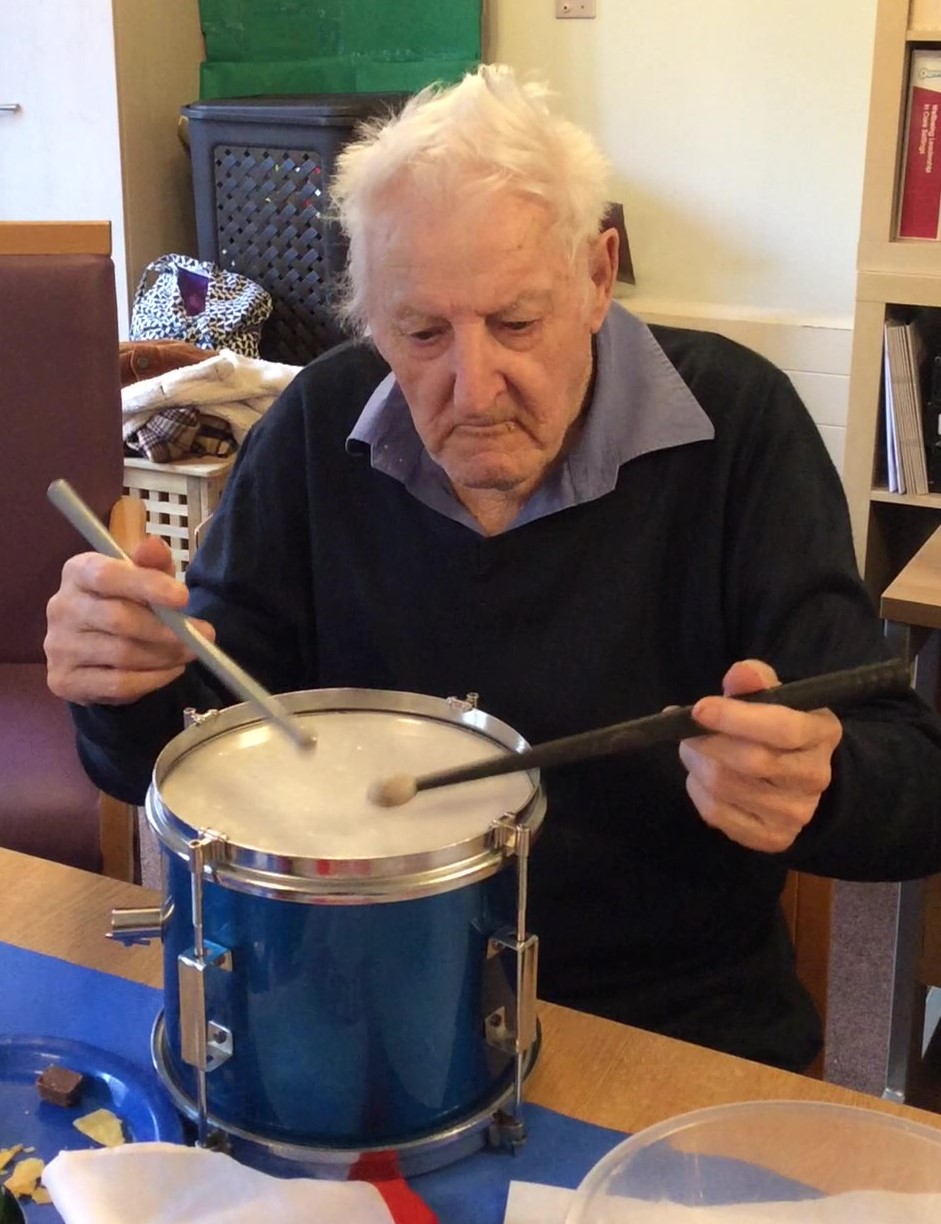 The pub club Rivers View returned to Riversway last week and our residents were delighted!

We all had fun playing games, listening to music, having a chat and enjoying a couple of drinks and eating some snacks.

It was a great afternoon and we even had some in-house entertainment.

One of our gentlemen played the spoons and the drums, and everyone agreed that they'd had a fun time! 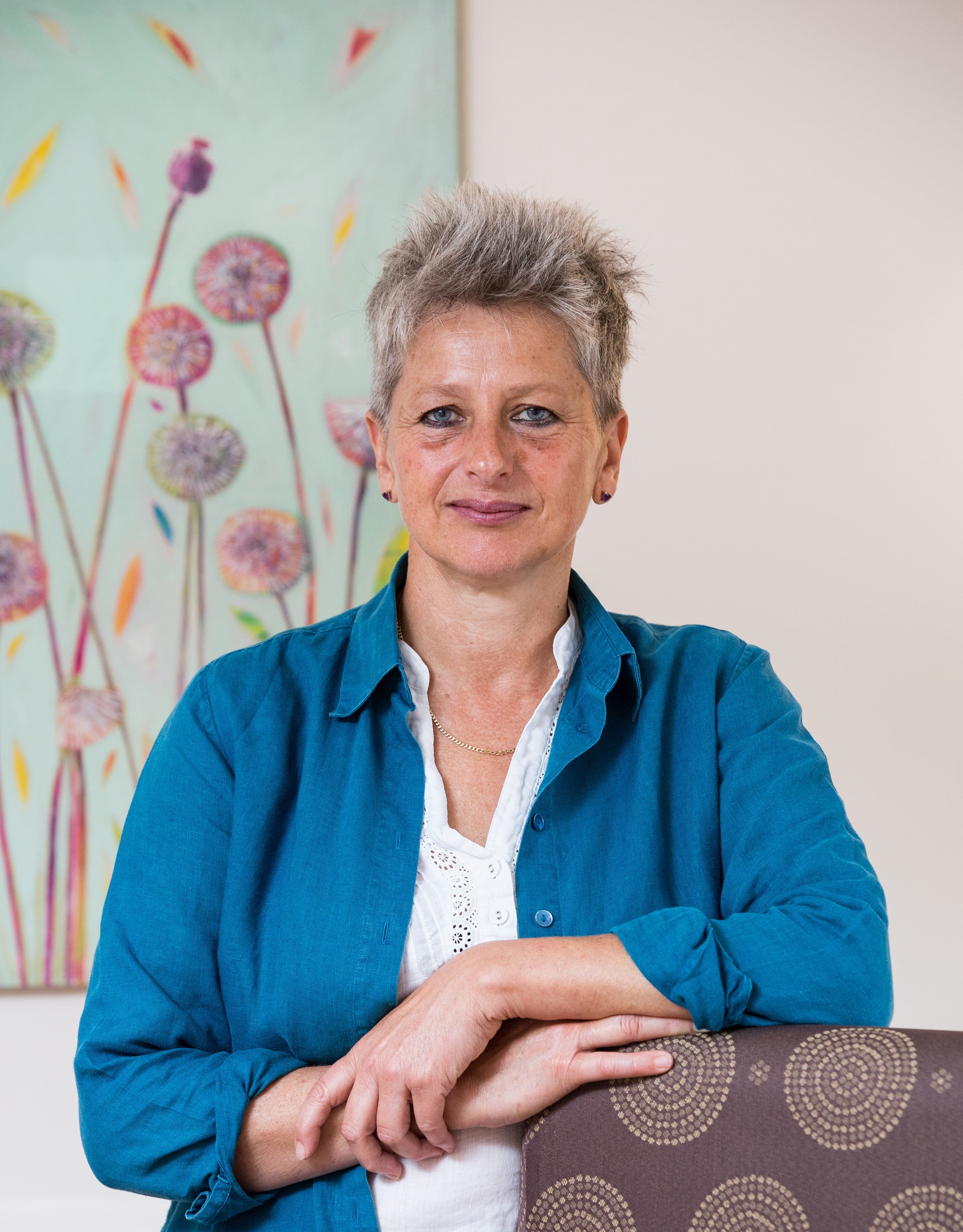 At Riversway Nursing Home we are holding a Raising Dementia Awareness month in March 2019.

In March we will start to train the nurses, managers and other key people within the home in Level 2* Dementia Awareness training. This will entail looking at:

Some of you might recognise that these subjects are covered in Springhill Care’s Dementia Champion training. This is indeed so, but the Dementia Champions cover them in more depth and also do a presentation of a case study about working with a resident who has dementia and their family.

After the level 2 training has taken place the 3 new team leaders at Riversway, Sian, Kiri and Megan, and other skilled carers within Riversway will be undertaking the new Dementia Champion training.

We are also starting to offer Dementia Awareness sessions for our outside community contacts such as volunteers at Riversway as well as offering this to local shops and churches.

Other projects happening during Riversway’s Raising Dementia Awareness month will be our regular Forget Me Not Cafe which will run alongside Dementia UK’s fundraiser Time for a Cuppa. Come and join us to raise money for this great charity.

* According to Department of Health (2015). Dementia Core Skills Education and Training Framework. 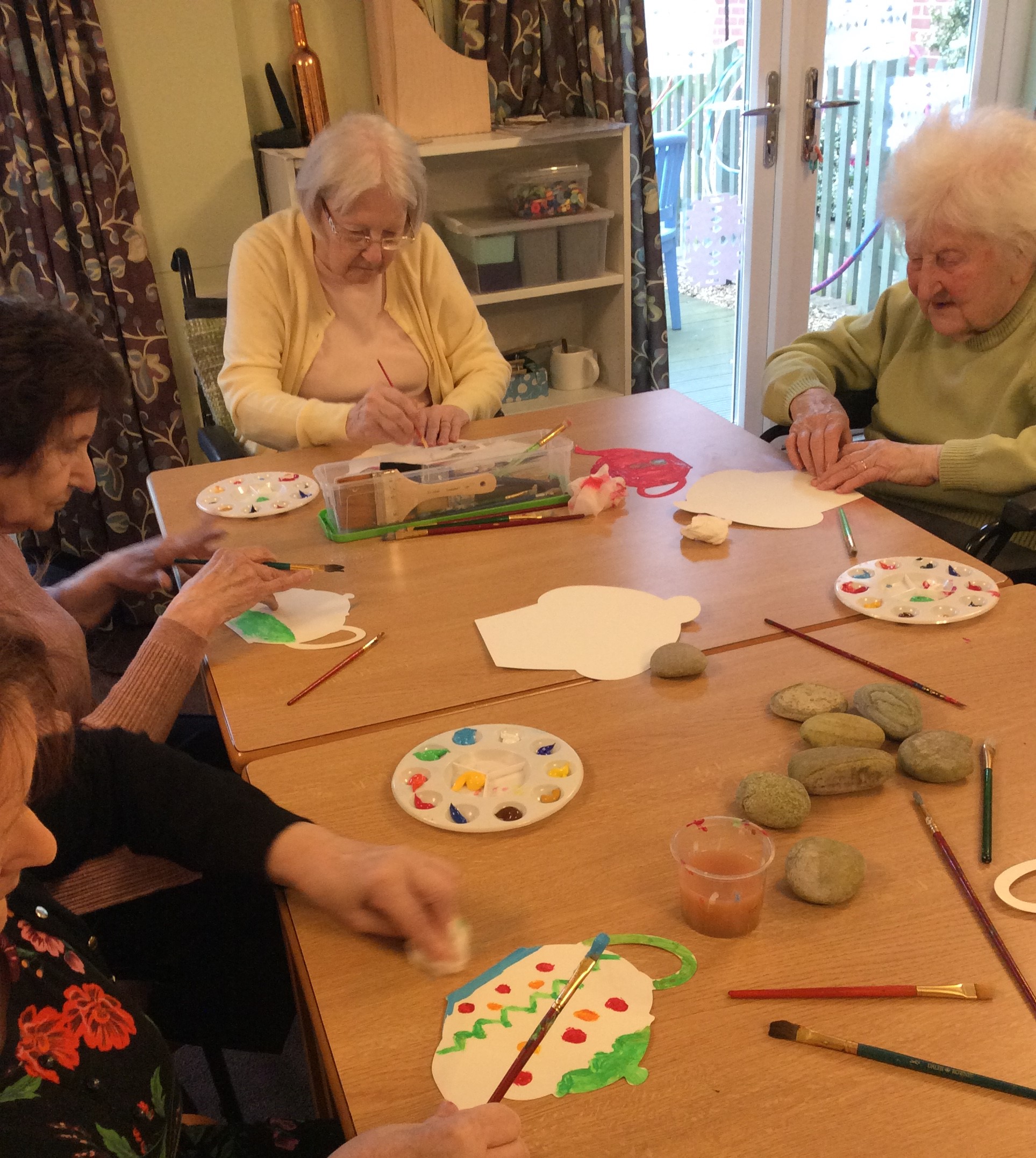 Art and craft sessions are very popular at Riversway Nursing Home and we recently had lots of fun painting cut out tea-pots, cupcakes and rocks with a selection of acrylic paints.

After deciding on a teapot and rock pattern and also the colour of our favourite cupcake, we got on with painting them all,  we then left them to dry before having a break to enjoying a nice cup of tea and a selection of biscuits, after a productive afternoon our ladies and gentlemen had certainly earned it.

It was a very fun and creative activity with lots of chatter – now what can we paint next! 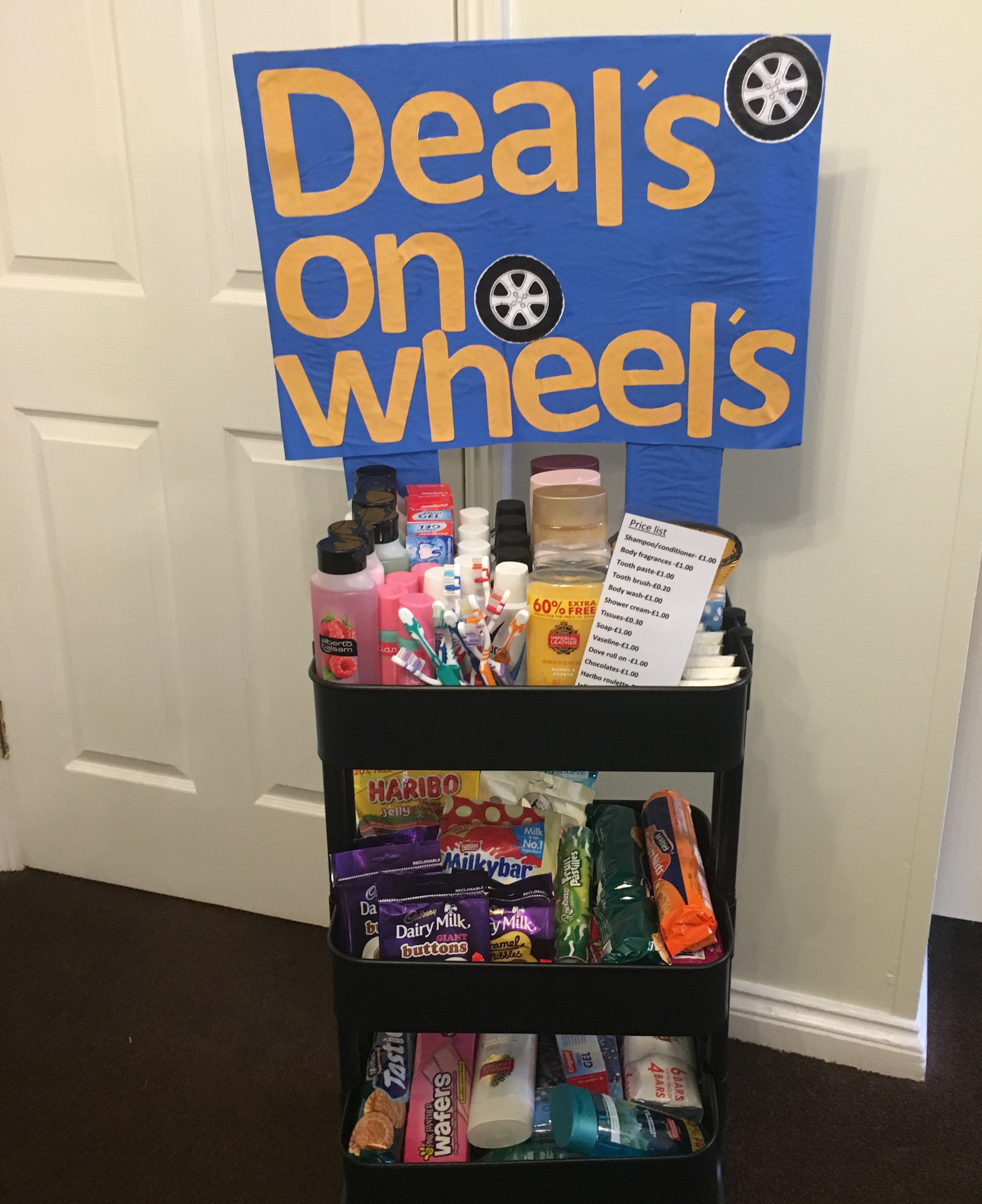 Riversway Nursing Home has invented ‘Deals on Wheels’ a new little mobile shop that will tour around the home.

Every Wednesday afternoon you will find our ‘Deals on wheels’ shop selling all kinds of toiletries and goodies for our ladies and gentlemen to choose from.

Everyone at Riversway loved the fun little mobile shop and it was hailed a great success. It helps us ensure that everyone has all the daily essentials they need, and I’m sure you’ll agree, it’s nice to do a bit of shopping now and again.